4 Places You Will be Shocked to See Golf Appear

Golf is a pivotal sport in modern culture. While not everyone has played, everyone knows how it is played, and there are few today who would not recognise names of golfing superstars like Tiger Woods.

But that raises the question- how often does golf appear in fictional stories, if at all? And how do these fictionalised games of golf compare to the real world?

We’ve compiled a few instances of golf appearing in unusual places, from crime thriller novels to quirky 90’s comedies, to see just how far the sports reach really is.

Four Places You Would Not Expect Golf to Appear

Back Spin by Harlan Coben

The U.S. Open is one of golf’s biggest events, and is arguably even one of the most important sporting events overall that takes place every year. With the worlds greatest players congregated in one spot, for what is always a nail-biting competition, it is difficult to imagine how an event could become any more gripping.

Author Harlan Coben answered this question in their 2009 book Back Spin, where they added a compelling kidnapping story of a Pro Golf playing couple’s son in the middle of The Open. 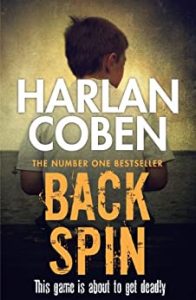 The Cover of Back Spin by Harlan Coben

The book uses the backdrop of The U.S. Open to tell a compelling and exciting action suspense story, full of exciting twists and shocking turns. So if somehow The Open has begun to become a bit dull for you, this book is absolutely worth a read.

The Lord of the Rings

It may come as a surprise to some to learn that the sport of golf also appears in the works of J.R.R. Tolkien, writer of The Hobbit and Lord of the Rings books and surrounding mythos. 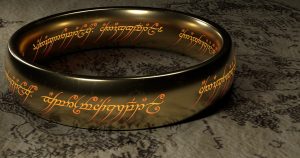 The One Ring, which appeared in The Lord of the Rings Franchise. Image from Pixabay

In the land of Middle Earth, golf came about as the result of a hobbit character hitting the head of a goblin (hilariously named King Golfimbul) off into a rabbit hole, with this act of heroism eventually morphing into a version of the game we know today.

While the inclusion of golf in this high fantasy environment is somewhat strange, what is even stranger is that this piece of information is only brought up once, and is never followed up or elaborated on in the narrative.

It seems even one of modern history’s most prolific writers was also a golf fan.

Yes, while being watched by celebrity golf enthusiast Billy Murray, Michael Jordan is dragged through a golf hole after landing his very first hole-in-one, thanks in no small part to Bugs Bunny and the gang.

While the scene does a great job in moving the film onwards, whilst also providing a great laugh at seeing Michael Jordan being dragged through a tiny golf hole, this scene’s attachment to the realities of playing on the green are unfortunately somewhat loose.

However, this isn’t to say it is the most popular of gaming subgenres. When compared to the mainline Mario titles, the entire Mario Golf series has sold less copies than the 15th best selling Mario franchise game. Therefore, it came as a surprise to many that earlier this month Nintendo released the trailer for their newest game, Nintendo Switch Sports, where the infamous Golf appeared amongst its options.

So, maybe, golf games are due for their time in the spotlight?