Uproar surrounding the Super Golf League continues today as reports come in of Lee Westwood signing an NDA with the league– a move which has potential to have him completely banned from many large events, including participation in the PGA Tour. 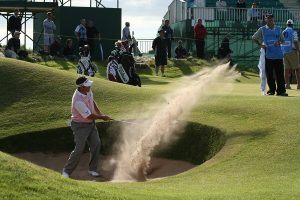 Lee Westwood has signed an NDA with the Super Golf League. Image from Wikimedia (2008).

What is the Super Golf League?

Saudi Arabia and its surrounding countries have proven to be formidable forces in the contemporary professional golf scene, with events such as last month’s Abu Dhabi HSBC Championship proof of the area’s significance. It is no surprise, therefore, that an expansion of the Asian Tour backed by Saudi Arabia would be a game changer, and would be massively impactful on contemporary play.

So What Is The Issue?

The biggest issue comes in the fact that the Super Golf League is in direct financial competition with the PGA Tour and DP Cup, amongst others. Their access to wealth and infrastructure means the league has the potential to undermine and reduce the significance of these other leagues, which in turn could lead to significant changes in the contemporary professional golf environment.

While a change like this may not immediately seem like a negative thing, the issue comes when considering other events, and the impact these high-paying tours may have. With player interest being focused on these high paying ventures, it would be no surprise if this led to other established tours reducing in scale, or shutting down entirely. This would be especially troubling for historically significant leagues, such as The Open, which has over 150 years of history.

This possession of wealth has already been seen, as earlier this week it was reported that Ian Poulter was offered a staggering £22 Million to join the league. If the league is capable of offering this much to just a single player, it is unknown how much they would be willing to pay for the players of their choice- and that is before even considering prize winnings from tournaments. 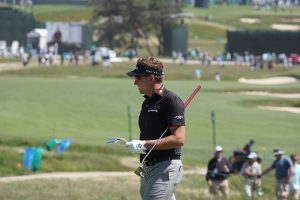 Ian Poulter was offered 22 Million by the Super Golf League. Image from Wikimedia (2018)

This is the primary reason that large tours like the PGA have threatened lifetime bans on players willing to sign on to the Super Golf League. The amounts being offered to players is eye-watering, and a players choice to take the league up on their offer is very understandable. However, this growth of the Super Golf League would be detrimental to other established tours, meaning drastic measures have had to be put in place to act as a deterrent.

What Do Others Think?

Opinions are mixed on the prospect of the Super Golf League. Many players seem mixed in their opinions, with videos like the one below proof that most are neither strongly for or against the league.

However, some have been vocal in their distaste for the backlash against the Super Golf League, such as Greg Norman, one of the events key investors. He argues that the league’s existence is for the benefit of professional golf players and fans, and that the attacks against the league are ‘disappointing’.

It is difficult to say this early in the leagues existence whether it will be a success, or whether that success will be a help or hindrance to professional golf.

On one hand, the amount of money being used by the Super Golf League is excessively high, and could easily contribute negatively to the sport. Many athletes are considered to be overpaid, and if the opinions on the wages of professional footballers is anything to go by, it may only be a matter of time golf players are thought of similarly.

However, on the other hand the Super Golf League may be a genuine asset to professional golf, while also helping to expand golf outside of Europe and the USA. 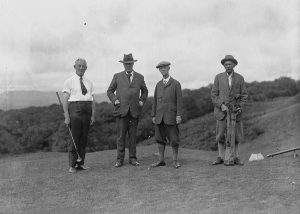 Photograph of Four Golf Players Taken in the 1930’s. Image from Wikimedia

Historically, golf was seen as a sport for the wealthy white elite, with much of golf’s history coming from the UK and U.S. To see the sport finding a place in Asia should be seen as a positive, as it will be giving opportunities to others who may not have access to golf inspiration and aspirations for the future.

So, what will become of the Super Golf League? It seems only time will tell.