Golf buggies have been in the news recently, as a recent article has stated that several golf teams across Northern Ireland are making a shift from the traditional golf buggy to electric golf boards, as part of a new scheme developed by the boards marketer, Thomas Hughes.

The boards, which resemble something more akin to an electric scooter than a golf buggy, are not the first to hit the market, and will likely not be the last, as trends in golf buggy tech and design seem to push towards these smaller, single rider models. But what does the future of golf buggies hold? And will the seated, four-wheel model become a thing of the past? 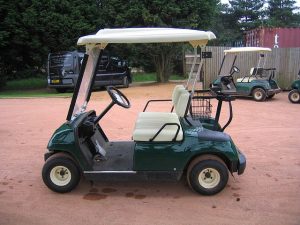 The Classic Design for Golf Buggies. Image from Wikimedia

Much like the boards being implemented across teams in Northern Ireland, many companies are moving in the direction of buggies that are electronically driven. Single seat buggies have been available on the market for some time, often following just on the technological tails of the bigger. However with brands like Segway leading the charge with their Personal Transportation devices which are perfect for easy travel around the green, it is no surprise this technology has yet to advance to multi-user devices. 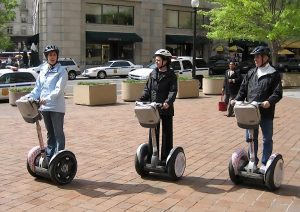 While a seemingly niche technology, one of the furthest departures from the traditional four-wheeled buggy is the robotic buggy.

As seen in products such as the Stewart Golf Q Follow, these products forego the player travel aspect of the buggy altogether, with their primary purpose being to transport the players clubs and belongings, following the player via a Bluetooth connection. They are less so a buggy and more akin to a self-driving trolley, but with one of the primary uses of a buggy being transporting player goods, it can still be considered an evolution of the product. 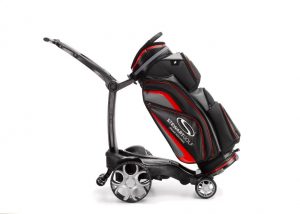 When the player walks towards the next hole, the Q Follow travels alongside them, allowing players freedom of movement without having to carry their possessions or start up to drive the buggy- something useful especially when travelling to find a ball lost in an awkward spot.

This technology, alongside the single rider electric buggies mentioned earlier, could all but remove traditional golf buggies from the course. But as alternative technology has evolved, so has the technology around the humble golf buggy, with these improvements proving that the four-wheel buggy will not go without a fight.

While these technologies are redefining the definition of what a golf buggy is, other companies are sticking to the tried and true model, adapting modern technologies to the classic buggy build to create the best experience.

Buggies such as the E-Z-GO RXV ELITE Lithium are great examples of this. This make of buggy keep the tried and true two-seat, steering wheel driven design, however utilise the latest in vehicle technology to make a buggy that is light, energy efficient, and eco-friendly.

One evolution from a traditional golf buggy is the implementation of electric batteries, meaning they can be plugged in and charged, as opposed to using petrol or another form of fossil fuel. Making buggies more environmentally friendly is a fantastic step forward, and one far more suited to these smaller vehicles.

While electric cars can only cover so many miles before needing to recharge at one the limited available charging stations in the UK, buggies only have to cover a portion of that distance, making electricity a far more viable option for them as opposed to the limited infrastructure for electric cars. Furthermore, with less weight to carry, the mileage on these batteries can go further, meaning all arrows are pointing towards the petrol fueled golf buggy becoming a thing of the past.

Another technological innovation seen in the E-Z-GO RXV ELITE Lithium is the inclusion of USB ports- an essential in the modern age of the smartphone. With so many applications available for players on their smartphones, from in-built step counters and maps, to apps designed specifically to measure your golf statistics, to golf games to test your skills off of the course, having your phone with you is a must. If these charging ports are not yet standard in golf buggies, it certainly will not be long until they are.

So, are golf buggies obsolete? Or are they just in the midst of their newest evolution?